Thanks, Len, for asking…

Oh boy…most who know me would warn you against throwing me such a soft pitch, but the simple answer is chickens and eggs.  First, people do watch the LPGA and the growing ratings support it.  People just don’t get to see enough of it to know just how good the product and these players are.  Here’s the short answer: sponsors aren’t coming until there are TV ratings, TV ratings aren’t going up until players are household names, players can’t be household names without being covered in the media.  Here’s the longer story (I warned you)…

1) Exposure to the product.  Like any women’s sport the coverage time is about 10 percent of what the men get.  Case in point: two weeks ago, Golf Channel four-putted the decision of running a second-tier PGA TOUR event live during prime time and relegated the first LPGA event of the season to tape-delay off-hours – which also happened to feature Annika’s first competitive event in more than a decade.  You can’t like what you can’t see.

Fun fact: In 2009 when my daughter – then 11 – starting playing competitive golf there were less than 1,000 girls aged 14-18 with national rankings.  Now there are about 4,000. Say most college coaches with whom I’ve spoken, the high school classes of 2014-2018 were the most competitive classes in history (current surge not included, and owed largely to those classes who came before them!).  Those young women are now graduating college.  People maybe have heard of the phenoms, the ones who are ready to march straight into the LPGA – for example and with huge congrats, to the 2016/15 class which features Maria Fassi, Sierra Brooks and Jennifer Kupcho, who are amazing humans as well as athletes.  You may never hear of the other 500+ because with so little opportunity for them to develop as professionals, most of them will stop playing after college. 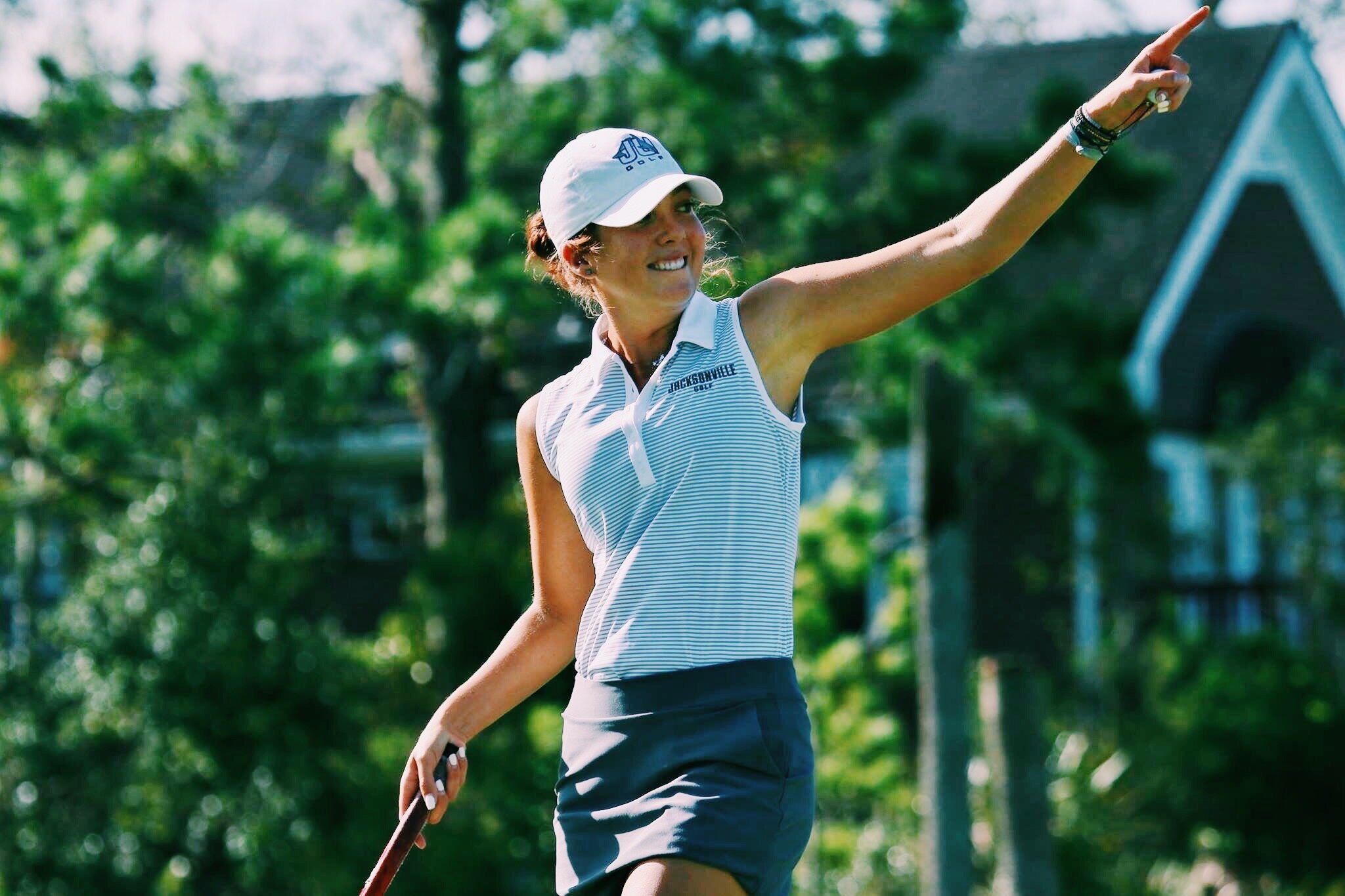 If given the chance, as golf fans (ie, men) start to watch the women’s game, they’ll realize, 1) these players are freakin’ good, fierce and competitive. Do you wanna get into a staring contest with Ms. Vilaubi, pictured here?  2) they’re fun, engaging and nice.  3) It’s a lot more entertaining and more relatable.  IMHO, the men’s game of “Bomb and Wedge” and who can get to 25-under is getting a little dull and there are fewer and fewer amazing personal stories.  Most male players and viewers can better relate to hitting a 7- or 8-iron in from 150, but not so much to sucking back a 54-degree wedge from 150.  And I can tell you, since I’ve known a lot of these players since they were kids, there are some great backstories to be told and admired.  After watching the British Open, one of the male members of the country club where my daughter works pulled her aside to tell her how surprised (joyfully so) he was at the talent and ferocity and sheer entertainment value of the women’s game.  My daughter cried, having waited forever to hear words like that from a male viewer – and an older one, no less!

2) We don’t get to know the women players until they’re on the LPGA.  So, we only hear about the three or four amazing women going straight to the LPGA or Symetra Tour right from college (what’s that, Len? You’ve never heard of the Symetra Tour?).  There are hundreds of amazing players on the Symetra Tour and on the other developmental tours, but those tours don’t get any exposure.  While even the crawl on Golf Channel features Korn Ferry and even LocaliQ Tour events (LOCALiQ tour being a men’s developmental tour and not even a secondary tour), the crawl for women is pretty much limited to LPGA scores – same with the agate in local and national newspapers.  This is actually the secondary reason for The Women’s Match Play Championship presented by PXG – to shine a light on this level of women’s golf (the first being to create for them playing opportunities so they can continue to develop and maybe even earn a living).

Fun fact: There are 30 (+/-) developmental men’s tours in the US and just three for women.   The industry calls them mini tours.  I personally am trying to change that vernacular because the only thing “miniature” about them is the purse size.  The men can make a living at this level and play year-round, while their female counterparts currently only have playing opportunities from April to October and have to wait tables at night to pay the bills – which is fine; so did I when I got out of college.  The difference is, I didn’t also have to pay to go to work.

Fun Fact Part Two: NO ONE would have EVER heard of these amazing developmental tours or the players competing on them if it weren’t for the pandemic.  Thankfully they stayed open while everything else shut down, so players like Sophia Popov (above) could continue to develop.  If you somehow missed her story, Sophia was one of those college players who wasn’t LPGA-ready the day she graduated, so she kept playing in the minor leagues knowing her best golf was in front of her.  She got to the point of retiring early in 2020, but didn’t.  Won a Cactus Tour event (which at least gave a quick media burst to this level of women’s golf) and then went on to WIN the Women’s British Open just a short time later.  Her story is deeper than that and amazing, but there are many Sophia’s out there who could get to the LPGA if the opportunities existed for them to try.

3) Sponsorship.  Again, chicken and egg…sponsors aren’t coming until there are TV ratings, TV ratings aren’t going up until players are household names, players can’t be household names without being covered in the media.  Someone has to go first.  My take is it has to be the sponsors.  The players are doing their part – they play, train, invest, travel just as much as their male counterparts.  We pay my daughter’s swing coach the exact same rate as her male battery-mates – same for her mental coach, trainer, nutritionist and the hotels where she sleeps on the road for a month at time.  No one is giving these players a break because they’re women and only earn 25% of what the men earn. The networks can and must make better programming decisions. But the sponsors have the money.  They simply choose not to spend it on women’s golf.

Here’s a sad story (unless you’re a male player).  A national digital ad company thankfully stepped up with a $400,000 sponsorship for a previously little-known tertiary men’s tour so the players could make a living during lockdown.  Seriously, this is great for the men!  Some of their events even got live TV coverage.  When I approached that company’d local offices in our market for a Founding Partnership investment of merely $25,000 to support the first professional women’s event in the market since the Carter Administration, I couldn’t even get a meeting (and, BTW, I spend more than $100k a year on their media for clients of mine!).   I can list many other national companies with local headquarters or ties who have also turned down this small investment in favor of investing in men’s events in the area.  For the record: I’m not saying don’t support men’s events. I am saying #SportsParityOffset – and parity doesn’t have to be equal.  $25k for the companies to which I refer is nothing, and they spend more than that on ONE DAY of entertaining 20 clients at that big (and important!) event in PVB.  Heck, the first-year senior tour event in our market is getting $12,000 for a Pro-am team (again, gratefully so, as that money is going to a wonderful charity!).  A senior representative for one such company actually told me their “golf spend” was limited to the senior event this year because their C-suite guys want to use it for some personal viewing time.  Huh?

Fun fact: It takes the top five LPGA purses – including the $5mm the US Open provides – to equal one PLAYERS Championship purse (again, good for them!).  The 2019 Symetra Tour money leader made a whopping $124,000 compared to her male Korn-Ferry Tour counterpart’s $550,000+.  The biggest purses for a Cactus Tour or WAPT Tour event is about $35,000 while the male version pays out more than $100k and some with purses of more than $400,000.  BTW: The players pay their own entry fee which largely funds the purse (men and women).  What little sponsorship there is goes largely to operating expenses.  These folks running the women’s mini tours…they make very little money.  They will all tell you – me included – that we’re in it to assist these amazing young women further their careers.

So let’s wrap this up.  Again, Len, thanks for asking.  While I realize this might seem a little “ranty,” maybe it’s time someone let out a good rant about it.  In the words of one of my mentors and heroes, she the owner and designer of a prominent line of women’s clothing, “sometimes you gotta break a few eggs.”

It is not going unnoticed that there is growth in the women’s game – the LPGA is offering this year its biggest total purse ever.  It seems like the Symetra Tour is adding events every time I read LinkedIn.  Media outlets like GolfWeek are giving women’s golf and college way better coverage than in previous years.  Groups like Trailblazers and Women’s Golf Day are doing their part to raise voices and attention. As Forbes points out, the business of women’s golf is booming and may very well be the future.  Hopefully this is a leading indicator of better things to come inside the ropes and on TV.  Maybe it’s the beginning of the end of the Shrink and Pink era.

In the meantime, and shameless plug here: The Women’s Match Play Championship presented by PXG is happening and it’s going to be significant.  Time to jump on board.  Call me at 904.838.4962 if you want to be one of our four – and only four – Founding Partners.